This post was originally posted to my Patreon on December 1, 2021.  See content like this early as well as additional behind the scenes content for as little as $1 a month to further help my artistic adventures.

Today I listened to an ancestral healing and cord cutting meditation that I feel truly changed me for the better. It ties into what I feel called to transcribe and channel now. In it I saw all of my ancestors and their pain and trauma in a beautiful vision. At the forefront was my twice great grandmother who my dad told me a story of when he was little. I’ll never forget this story because it has caused me so much pain and heartache over the years.

It’s actually a fairly recent story he told me when I was in my late teens. I want to say I was a sophomore in college, okay so maybe not that recent anymore. But it isn’t like some hazy childhood memory, it's something much more concrete and told to me when we were both of sound mind and body. We were out on a First Friday artwalk in Portland Maine. One of the shops downtown was a framing shop and map store. Of course I was very intrigued and so was my dad. We made our way down to the lower level and there in the basement hung a large map of the continental U.S. On it instead of states were names of various Native American tribes from across the country. That’s where I found my dad.

As we looked at the map he pointed to a small label midway up the east coast labeled “Delaware”. He told me that was where we came from. What our tribe was. And how his great grandmother had taken him in her lap when he was very little and told him to never forget that he is of this land. He said she told him much of her heritage had been taken from her but she held onto the knowledge that this land would be her descendents home for all time. Just as it had been for all of her ancestors. That story stuck with me and resonated so deep in my core. It pushed me to learn more about her and my lost heritage from all of my ancestors.

Growing up spending much of my life in New England one of the things I’ve come to realize is it doesn’t exactly matter where your family comes from. What matters is the land beneath your feet and the world around you. Something I’ve always known is the Animism of everything. Everything ever born, made or formed has a Soul, a spirit, a purpose. Knowing this now as my path forward becomes ever clearer I see that a new approach is necessary. A new Celtica in Appalachia. An animistic approach to life here.

My family comes from the heart of colonial Irish country. My mother’s maiden name was McGee. And both sides claim a Celtic heritage. So I come from two distinct regions separated by an ocean with almost no connection to my family’s ancestral past. And what little information I did have felt hollow and lacking. However there was one thing that connected every one of my ancestors whether they were aware of it or not, the land beneath my feet.

In order to honor my heritage and the people I saw in my vision today is to return to the vital and powerful animism and respect for Nature. Ancient Celtic Druids and Native American medicine folk as well as their cultures revered the world around them as a sacred space. Church wasn’t found in a building but within yourself. I know this is what I was searching for in my exploration of Divinity all this time. It is my hope that by channeling this “New Age” Animism for my  homeland, I can honor all of my ancestors, Lenape, Gaelic, Polish, Welsh, Scottish, all of it together within me. But most importantly I can honor myself. Ultimately faith is a completely singular journey. A deep, never-ending conversation with yourself. And so I will speak kindly to myself and further embrace this New Age Animism and revere Creation with every dawn.

Embrace the Dragon Within 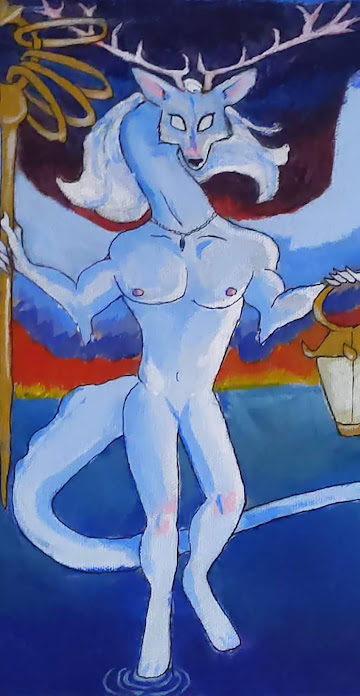